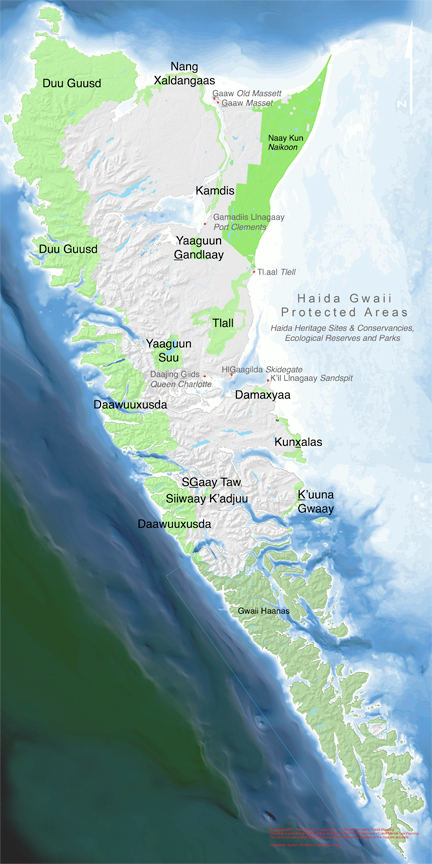 When the K’aas Gandlaay area is included in the Duu Guusd Heritage Site and Conservancy, as agreed to by the Haida Nation and the Province, it will add 1,202 hectares to the more than half-million hectares of upland and foreshore area already protected on the Islands. These areas, including the Gwaii Haanas National Park Reserve and Haida Heritage Site, Gantl’ Gadaas Pure Lake and Naay Kun Naikoon Provincial Parks, five Ecological Reserves, and 11 Protected Areas, cover more than 52% of the archipelago.

When the boundaries for Duu Guusd were estab­lished in 2008, K’aas Gandlaay, an area of high cultural value, was considered for inclusion but outstanding issues had not been resolved. At the time, Husby Forest Products was active in the area and had already made an investment towards road development. Through negotiation, the Haida Nation reached an agreement with Husby to cease activity around K’aas Gandlaay, but that occurred after the establishment of the Duu Guusd protected area.

In the years since, the Haida and provincial governments have agreed that K’aas Gandlaay should be includ­ed within the protected area of Duu Guusd. In the interim, the provincial government established a forest re­serve in the area to provide protection until K’aas Gandlaay could be desig­nated as part of Duu Guusd. Following that, the HGMC sent a letter to the Deputy Minister, Ministry of Environ­ment, requesting that the boundaries of Duu Guusd be amended to include K’aas Gandlaay. The Haida Nation and the province have now agreed on technical aspects of the boundary and the Province is prepared to seek a leg­islative amendment to the Duu Guusd Haida Heritage Site and Conservancy to include the K’aas Gandlaay area.

The Haida Gwaii Management Council is responsible for developing policies and standards for the iden­tification and conservation of heri­tage sites, and for the approval and amendment of management plans for protected areas. Protected areas, which are jointly managed by the Haida Nation and the Province, are important as cultural, social, ecolog­ical and spiritual sites. They include permanent and seasonal village sites, places for the collection of food and medicine, trade and potlatching sites, and areas containing biologi­cally diverse habitat for endangered and at-risk plants and animals.

The Haida and provincial gov­ernments are currently in the process of setting priorities for updating management plans for the protected areas, which are formally recognized by the Haida Nation as Haida Her­itage Sites and by the Province of British Columbia as Conservancies. Each management plan establishes the vision, long-term strategic direc­tion, guidance, and acceptable uses of the area; ensures that any activities are respectful of the natural values and not in conflict with Haida social, ceremonial and cultural uses; ensures protection for lands and seas in their natural state; describes the background and legal context of the area; and, man­ages visitor use. The governments are updating the plans to ensure that the objectives and strategies of each plan are in line with the recently developed Haida Gwaii Marine Plan. Once the HGMC approves the new or amended Protected Area Management Plans they become legal documents under the Haida Gwaii Reconciliation Act.

The Haida Gwaii Management Council is responsible for approving plans for:

The amendment, which is now in force, includes several additions to existing protected areas. The largest addition was made on Haida Gwaii, where the K’aas Gandlaay Pitch Creek area was added to the Duu Guusd Haida Heritage Site and Conservancy. Duu Guusd is Haida Gwaii’s second-largest protected area, encompassing a sizeable swath of the west coast of the Islands.

In 2008, when the boundaries for Duu Guusd were officially established, K’aas Gandlaay was left out. K’aas Gandlaay has long been considered an area of high cultural value by the Haida Nation. Situated east of T’aat’uu GawGaay Tartu Inlet near the mouth of Chaahluu Kaahlii Renell Sound, the K’aas Gandlaay area is rich in archeological sites, some of which were recorded by the Council of the Haida Nation between 1998 and 2003. The most unique of these findings were dozens of culturally modified kayd Spruce trees scattered along the creekside. The trees, some still living, bear scars that show where Haida ancestors extracted k’aas Spruce pitch many generations ago.

In 1981, as concerns were growing about the scale of logging on Haida Gwaii, the Haida Nation designated Duu Guusd Tribal Park and petitioned the provincial government to defer all development plans within the area. Duu Guusd was the subject of conflict for three decades while the Haida Nation protected the area from logging. In 2008, Duu Guusd became formally protected both by the Haida Nation as a Haida Heritage Site and by the Province of British Columbia as a Conservancy.

At the time, however, Husby Forest Products was active in the K’aas Gandlaay area and had already made an investment towards road development. Through negotiation, the Haida Nation reached an agreement with Husby to cease activity around K’aas Gandlaay, but by that time the protected area’s boundary had been established and K’aas Gandlaay remained outside of Duu Guusd.

Since then, the Haida Gwaii Management Council, the Council of the Haida Nation, and the Province have worked to add K’aas Gandlaay to Duu Guusd. In 2015, the HGMC wrote a letter to British Columbia’s Deputy Minister of the Environment, officially requesting that K’aas Gandlaay be added to Duu Guusd. In the interim, the area was designated as part of a Forest Reserve in order to afford it some level of protection under Provincial law. This Spring, K’aas Gandlaay was included in Bill 19 Protected Areas of British Columbia Amendment Act, 2018 which amends the legal description of Duu Guusd protected area to include K’aas Gandlaay.

With the protection of K’aas Gandlaay now formalized in both Haida and provincial law, the updated Duu Guusd Haida Heritage Site and Conservancy now covers approximately 144,934 hectares of upland and 84,173 hectares of foreshore.