These areas, which have long been revered and protected by the Haida Nation for their cultural, ecological, and spiritual values have now been recognized by the Province of British Columbia. These new protected areas on Haida Gwaii cover over 256,000 hectares of upland and over 166,000 hectares of marine foreshore and, together with other protected areas, contribute to the permanent protection of over half of the land on the Islands. 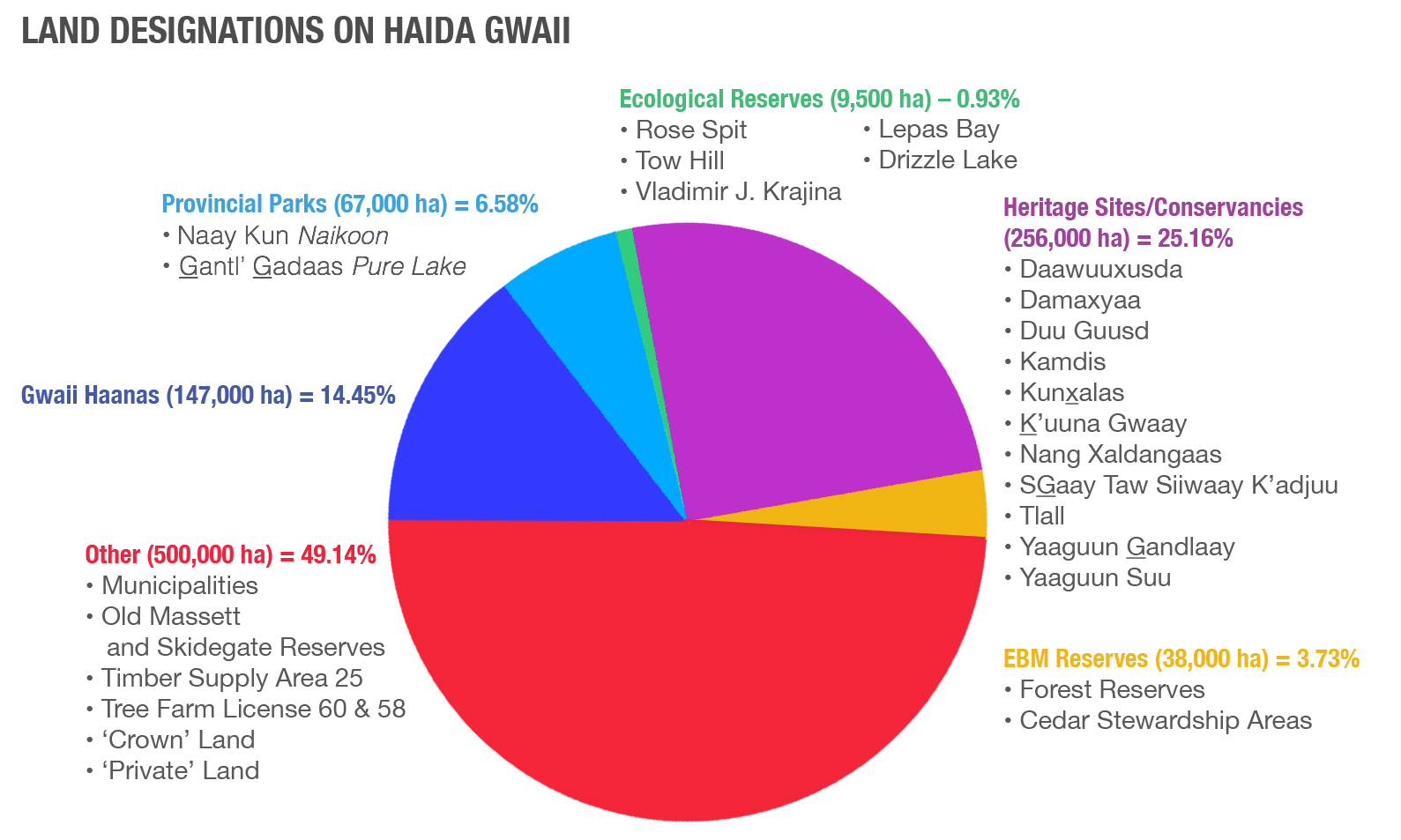 The remote location of Daawuuxusda Heritage Site/Conservancy provides an excellent opportunity to maintain biological diversity and natural environment values. Of concern, though is the presence of introduced mammals (e.g., Raccoons, Norway Rats and Black-tailed Deer) which pose a threat to local ecosystems. Sowthistle, an invasive nonnative plant, also occurs here. Daawuuxusda Heritage Site/Conservancy has an important role in providing recreational opportunities such as fishing, wildlife viewing, kayaking and other boat travel, anchorage locations and places suitable for camping and hiking in a remote wilderness setting.

The people of the Haida Nation have occupied and collected food and materials from Damaxyaa since time immemorial. A seasonal camp known as Kil was originally located at the mouth of Daamaxyah Gandlaay Haans Creek on Kil KaaGan Shingle Bay just to the north of the heritage site/conservancy. Another seasonal camp known as SKiina Llnagaay was located just to the east of the heritage site/conservancy on the shores of Siigaay Hecate Strait.

Kil Llnagaay the village of Sandspit is the closest community to Damaxyaa Heritage Site/Conservancy. It borders on the northern and eastern sides of the heritage site/conservancy.

Needan Stlang/Niidan Kaahlii Naden Harbour and Xins Stlang Henslung Cove on Kiis Gwaay Langara Island are the centres for fishing lodge resorts and are popular destinations for guided and non-guided saltwater fishing vacations. The Chahluu Kaahlii Rennell Sound area on the southern end of the heritage site/conservancy is the only west coast area on XaaydaGa Gwaay.yaay IinaGwaay Graham Island that is accessible by vehicle and is a popular area for fishing.

The heritage site/conservancy helps protect an internationally significant intertidal estuarine wetland complex that provides habitat for waterfowl, shorebirds and salmonids and has been used since time immemorial by the people of the Haida Nation for cultural, social and economic purposes. Eleven registered archaeological sites and 77 culturally modified trees have been recorded so far within the heritage site/conservancy.

Access to Kamdis Heritage Site/Conservancy is easiest by boat via Masset Sound or Gaw Kaahlii/Gauu Kaahlii Masset Inlet from the communities of Gaaw/Gaauu Llnagaay Masset or Gamadiis Llnagaay Port Clements, but overland access from Highway 16 may be achieved at several locations by short side roads and/ or footpaths. Several private properties are located adjacent to the heritage site/conservancy and landowners typically use boats to access their properties by water via Yahtaahl Kaahlii Kumdis Slough.

There is also a regionally significant hiking trail along the coast, easily accessed by road at Gray Bay that connects a variety of beaches. Trails also lead to Sheldens Lagoon (Dogfish Beach has remnants of a dam and a settler’s cabin from 1907) and Cumshewa Head which is a 24 km round trip. A popular frontcountry camping area and day-use site is located at Diinal GawGa Gray Bay, and a smaller one at Kuntsii Sheldens Bay.

Other recreational sites of interest include the remains of an old store (1869) at KuuGahl McCoy Cove, the site of a Loran communications tower at Iitllgas Kun Gray Point and a navigational light at King Gwaay Kingui Island.

The remote location of Nang Xaldangaas Heritage Site/Conservancy provides an excellent opportunity to maintain biological diversity and natural environment values. Of recent concern is the presence of introduced mammals of which Black-tailed Deer and Raccoons pose a threat to local ecosystems and species.

Access to SGaay Taw Siiwaay K’adjuu Heritage Site/Conservancy is primarily by floatplane, or helicopter, although Forest Service roads on Taaxwii XaaydaGa Gwaay.yaay IinaGwaay Moresby Island are in the vicinity of the heritage site/conservancy, and overland hiking access is possible for those experienced in route finding. SGaay Taw Siiwaay K’adjuu Takakia Lake is relatively small and floatplane access can be difficult for some aircraft under certain loads, but it is the only alpine lake accessible by floatplane outside of Gwaii Haanas National Park Reserve and Haida Heritage Site (where landing floatplanes on lakes is prohibited).

Protection of SGaay Taw Siiwaay K’adjuu Heritage Site/Conservancy will help to preserve and maintain the ongoing social and ceremonial use of these cultural features, focusing on protecting harvesting and hunting areas and their associated cultural and biological values. It will provide for present and future Haida access to those areas for social, ceremonial and cultural purposes.

The people of the Haida Nation have occupied and collected food and materials from Tlall since time immemorial. The Haida maintained villages and seasonal camps at nearby Daaxwa Llnagaay and HlGayxa.

Of recent concern is the presence of introduced mammals of which Black-tailed Deer and Raccoons pose a threat to local ecosystems and species. Several alien invasive plants have also been recorded in the conservancy area including Burdock, Bull thistle, Canada thistle, Sowthistle, and Scotch broom.

Yaaguun Gandlaay Heritage Site/Conservancy has been used since time immemorial by the people of the Haida Nation for cultural, social and spiritual purposes. The villages and seasonal camps of SGaahldang Kun Lngee, Hlaakiigans Lngee, Yaagun Kun Lngee, and Gandl Skajangs were originally located at the outlet of Yaagun Gandlee/Yaagun Gandlaay Yakoun River and around the shoreline of Yaagun Kaahlii Stlang Yakoun Bay. This area was considered as one of the most important food fish gathering locations on Haida Gwaii. Twenty-five registered archaeological sites exist within the boundaries of the heritage site/conservancy and hundreds of culturally modified trees have been recorded within this area.

The Yaaguun Suu Heritage Site/Conservancy area has been used since time immemorial by the people of the Haida Nation for cultural, social and spiritual purposes. The freshwater lake and river system has high value for a diversity of salmonids. The presence of intact, old-growth forests provides excellent forage and habitat for stads kun Northern goshawks.

The Friends of Yakoun Lake constructed a series of lakeside trails and continue to maintain them as well as conduct other stewardship activities in the vicinity. The Research Group on Invasive Species constructed a fenced exclosure research plot to study the effects of deer browse on the natural ecosystem. Two other larger exclosures also exist that were built by the Haida Forest Guardian program for the study of medicinal plants (ethnobotany).

Access to the northern side of Yaaguun Suu Heritage Site/Conservancy is primarily by Forest Service roads either via Gamadiis Llnagaay Port Clements or from Daajing Giids Queen Charlotte. Access to Yaagun Yakoun Lake itself is only possible by foot from a small parking area at the end of a short spur road just north of the heritage site/conservancy.